The Morgan Plus 4 (or +4) is an automobile produced by the Morgan Motor Company. It was a more powerful and, in the case of the earlier cars, slightly longer version of the company's previous 4/4 model. Plus 4 production ran from 1950 to 1969. It was revived in 1985 and filled the gap between the 4/4 and the Plus 8 until 2000. It was again produced from 2005 until replaced in 2020 by the "all new" Plus Four built on a bonded aluminium platform.

After World War II the Morgan Motor Company re-introduced their 4/4 model fitted with a 1267 cc Standard engine. This continued in production until the larger Plus 4 replaced it announced at the 1950 Earl's Court Motor Show.

The Plus 4 at its introduction was fitted with a 2088 cc Standard Vanguard engine installed on a widened and strengthened 4/4 chassis with a wheelbase lengthened by 4 in (102 mm). Hydraulic brakes, initially all drum, were fitted for the first time on a Morgan.

In 1953 a higher performance version was announced with the 1991 cc I4 engine as used in the Triumph TR2.

A cowl that blended into the bonnet now surrounded the radiator grille. Front disc brakes became an option in 1959 and were standardised in 1960.

The bonnet of the Triumph-engine Plus 4 fitted so closely to the engine that there was no room for an air filter.

Following success at Le Mans a higher performance version, the Plus 4 Super Sports, was available from 1962 with a tuned engine and a lightweight body. Just over 100 were built.​

This 1960 Morgan Plus 4 2 seater was dispatched on 13 December 1960 and sold by the Morgan dealer Basil Roy in London to Lt DW Deutermann.

The car was delivered in Broken White with Black PVC Upholstery with the following extras:

The car has been fitted with a full roll bar, fire extinguisher system, four point harness, Hardtop, and many many extras.

The car has a full FIA documents and is well prepared for every occasion and track world wide. 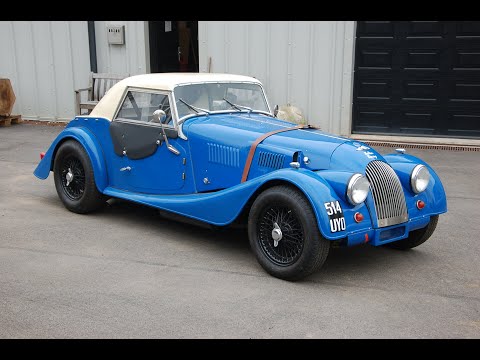 Contact Classicmobilia
We would like to hear from you with any comments or features you would like to see on our website. We will endeavour to reply to you as quickly as possible.
Mobile + 44(0) 7889 805432
Land Line +44(0) 1908 270672
keith@classicmobilia.com
1 Farjeon Court
Old Farm Park
Milton Keynes
Buckinghamshire
MK7 8RE
United Kingdom
About Classicmobilia
© 2023 Classicmobilia. All Rights Reserved
We are home to the highest level of expertise in classic vehicles in Milton Keynes.