The racing history of the first Nash-Healey Le Mans car began in 1950 when Donald Healey Motor Company and the Nash Corporation joined forces to create a new automotive identity - the Nash-Healey.

They wasted no time in developing their first racing product; chassis X-5 in a newly designated N Type series was fitted with a Silverstone body and powered by a Nash Ambassador six-cylinder engine, three speed transmission, with Borg Warner overdrive.

The cars first race was in the 1950 Mille Miglia in Italy. While participating in the race, Donald and Geoff Healey had problems with the car; the oil would overheat every time the car was driven wide open for long periods and it lacked top competitive speed.

Ducting for the radiator was enhanced and new, improved piston rings were installed to reduce the blow-by that had caused the high oil temperature.

The main portion of the Silverstone body was retained but the cycle-type front wings were removed and replaced with a wing that mated with the body for the whole length of the car.

When road tested, the top speed was shown to have increased by 20 mph

Now the car was ready to become the 1950 Le Mans Nash-Healey.

Roger Menadue, Healey's Chief Experimental Engineer and the mechanic for the Le Mans race, has very clear memories of that day.

"For the 1950 Le Mans race we installed the Nash engine and the running gear into a Silverstone chassis and body (modified with slab sides) We only entered one car.

The car behaved very well, being driven by Tony Rolt and Duncan Hamilton. We were feeling quite pleased with its performance.

Unfortunately, on Sunday morning, fairly early, a Frenchman, having lost his brakes, ploughed into the rear while Duncan Hamilton was driving.

Duncan came storming into the pits amid clouds of smoke caused by the left rear mudguard, or wing, jammed down on the tyre.

The exhaust pipe and silencer was torn off the rear mounting and dragging on the ground.

The rules at that time only allowed one mechanic, nominated at scrutineering, to work on the car for the entire 24 hours.

Everything you used, spares, tools, wire, tape, etc. had to be carried to the car. If you used anything that was not, the car would be disqualified.

I had to remove the damaged wheel, after beating and levering the damaged wing, I was able to clear the wing some more. When I was satisfied with the wing, I had to replace the exhaust and wire it up to last the rest of the race.

All this took 20 odd minutes. My repairs lasted the remainder of the race and the car finished in fourth position overall, so we were more then delighted.

The third place car, an Allard finished on the same lap as us and was only 20 seconds ahead at the finish. I often wonder what the result would have been if we had not had the shunt"

Duncan Hamilton, in his book Touch Wood states, "this car was something of a hybrid and various troubles developed in practice. Donald Healey ironed them all out however, and by race day the car was running beautifully.

Its top speed was no more than about 140 mph but the engine was very rugged and reliable.

Tony Rolt and I decided to apply the laws of opposites and to drive fast when everybody else was easing up, at night for instance, or in the rain. Tony and I finished fourth. Our average was 87.636 mph.

Thanks to the Healey Book for the information. 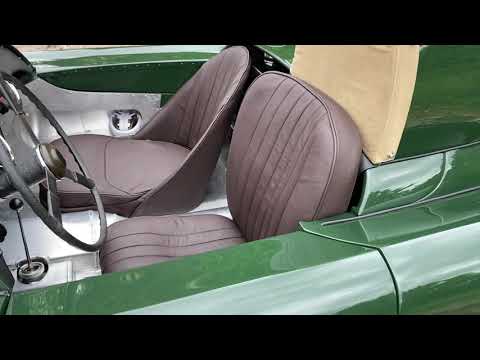