‘The V8 Vantage is a handcrafted sports car that offers electrifying performance and outstanding agility. The most affordable of all Aston Martins, it combines traditional hand built Aston Martin style and everyday usability. The result is the world’s most desirable sports car.’

​Aston Martin’s V8 Vantage Coupé was launched at the 2005 Geneva Motor Show. Although it resurrects a famous model designation from the Company’s past, the current Vantage was all-new and the time, featuring a 4.3-litre quad-cam V8 engine with dry-sump lubrication.

The latter enables the engine to be mounted low in the bonded aluminium body/chassis for better handling, while the use of a rear transaxle has resulted in near-perfect 49/51 front/rear weight distribution. With 380bhp, the V8 Vantage accelerates from 0-62mph (100km/h) in 5.0 seconds on its way to a top speed of 175mph.

​Superbly designed and detailed while possessing class-leading agility and performance, the Vantage is nevertheless a practical two-seater with a large tailgate providing access to the 300-litre rear luggage compartment.

The Vantage benefits from numerous passive and active safety systems. The list price started at £83,000.

This car was being sold by Aston Martin to raise funds for road safety initiatives by UNICEF China, the V8 Vantage Coupé is the first car to cover the entire length of the newly completed Asia-Pacific Highway, which stretches 10,000 miles from Tokyo to London.

Driven by two intrepid Britons, Richard Meredith and Phil Colley, the V8 Vantage – prepared and loaned to them by Aston Martin – completed the epic journey on 14th August 2007, having travelled for 49 days through 18 countries, raising awareness and much-needed funds for children’s road safety campaigns in the developing world.​

Prepared at Aston Martin’s global headquarters in Gaydon, Warwickshire with minor modifications such as strengthened sump guard and raised suspension to deal with the often gruelling conditions, this otherwise standard car completed the task without missing a beat, proving a model of reliability and performing faultlessly throughout the trip. There surely has been no sterner test of a modern production sports car.

They undertook the challenge, which was titled ‘Driving Home Road Safety 2007’, with the support of the United Nations, UNICEF and the FIA Foundation.

This historic trip has been submitted to the Guinness Book of Records.

‘KR05 YWU’ has covered some 115,000-or-so miles from new and was sold in Bonham’s December London auction at Olympia sale.

The car was sold without reserve and all sale proceeds was donated to UNICEF China to be used for road safety initiatives.

With the car comes lost of support material and a limited-edition print run of Messrs Meredith and Colley’s travelogue is in preparation, a personally signed copy.

Still in outstanding condition and one of the quietest v8 Vantage you will ever drive, just an outstanding feat for a modern day car of today. 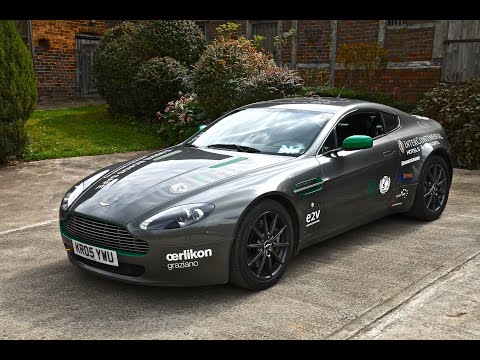 Having been based in Milton Keynes for more than eight years, in time we have amassed one of the biggest collections of rare and vintage cars in the country. With our clients coming from across the UK and beyond to view our impressive selection of classic vehicles.