Personal Number Plate will be REMOVED

Aston Martin V8 Vantage chassis number 70002 was ordered by Mr. Roger Baines in May 1993 and was the second customer car built and supplied.

Mr. Baines ordered the Aston Martin V8 Vantage car through George Patterson of Murray Motor Company Scotland and took delivery on 1st January 1994 and was delivered to his Bath residence.

The first three customer cars were built in the Engineer department at Aston Martin Newport Pagnell, Buckinghamshire and were slightly different to the standard production specification, which followed.

Mr. Baines being the enthusiastic collector of fine motorcars always made sure his cars were to his specification and stipulated a number of upgrades to his requirements. This included standard handbrake (Not fly off).

His personal assistant Paul Cox who was trained by Aston Martin to care for the car while in his supervision always looked after the car.

In 2013 Mr. Baines sold a number of his car in his collection and the Aston Martin V8 Vantage was to be sold, with only 11,500 documented miles on the clock.

The second and current owner of the car has taken the same care of the car with all the servicing being carried out each year by Trinity Engineering of Surrey. Like Mr. Baines the car was kept in exactly the same way and looked after to the same high standards.

This particular Aston Martin Vantage is one of the most original cars we have had the pleasure of handling. Being a very special motorcar with the Aston Martin Engineering special touches makes this car very unique in so many ways.

And the fabulous documented history file along with two conscientious owners caring for the car during ownership, I have ever had the pleasure of meeting.

It is a shame all cars are not treated this way!

The cars fitted luggage is still like new, the car has all its original keys, hand books tools. The music system has been updated and the battery conditioner has been replaced, that’s how original the car is.

Stunning colour and condition throughout makes this car so desirable.

I have had the pleasure of being part of this car from new, during the purchase, hand over, servicing, re-sale and now, it has been a total pleasure and a privilege. 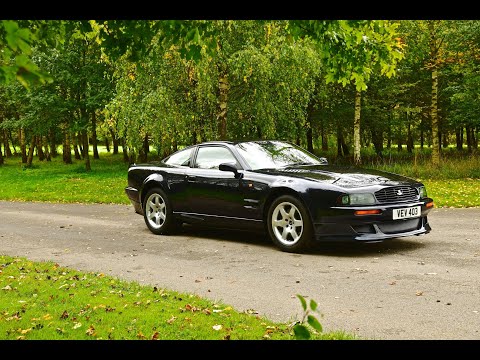 No car of the 1990s could propel its occupants with such speed and in such opulent comfort as the Aston Martin V8 Vantage V550.

A re-bodied Virage – only the roof and doors were carried over – the V550 name denoted the colossal power that saw one of Newport Pagnell’s last hand-built cars surge to 186mph, passing 60mph in just 4.6 seconds.

That this is slightly slower than a Lamborghini Diablo or Ferrari 550 Maranello should be put firmly in context; the Aston is no lightweight racer, it’s a grand tourer pushing two tonnes, nearly half a tonne heavier than the Italians.

Pound for pound then, the V550 was pure supercar in a large coupe body – in terms of output the most powerful car of its day thanks to its twin supercharged 5340cc V8 engine.

But that immense power married to a much softer suspension than that found in a pure-bred sport-scar provided its own problems: the V550 could be less than stable and it took experience to handle it.

Even Jeremy Clarkson, who loved the sumptuous big-engined Brit, admitted: “The Vantage is not a car that you can jump into and drive quickly straight away – you’ve always got to remember the huge weight. Go into a corner too fast and it’s going to plough straight on.

“This is a Roll’s Royce…with attitude.”

Stopping such a heavy car from such high speeds was left to the 362mm-diameter, AP Racing front discs and callipers – at the time, the largest fitted to a production car.

Then, in 1999, with European emission and safety regulations looming, Aston gave one last hurrah to the last of their coach-built cars, producing 40 V8 Vantage Le Mans specials to commemorate four decades since the marque’s win in the race.

The Le Mans came with Koni shocks, Eibach springs, and stiffer anti-roll bars, with the car distinguishable by its blanked out front grille, larger spoilers and modified side vents.

It was without doubt the most powerful production car in the world at the time, and Aston claimed a top speed of 200mph and 0-60mph in 3.9 seconds.

By the turn of the millennium, it was time for a new breed of sleek, V12-engined Astons to take the brand forward. here ...


About Classicmobilia
© 2022 Classicmobilia. All Rights Reserved
We are home to the highest level of expertise in classic vehicles in Milton Keynes.