The Banham Company, started off as a coach-builder converting vehicles into convertibles.

Based in Rochester, Kent,was founded by Paul Banham who He made convertible versions of the Ferrari 400, Aston Martin DBS and Aston Martin V8, and the Rolls Royce Corniche.

Later in 1990s the company moved onto selling conversion kits to the general public to convert every day production vehicles into something sportier, these were mainly based on British cars such as the Austin Mini’s, Austin Rover Metro’s, Jaguar models and the Austin Maestro but the company gained a lot of fame for Porsche replicas.

Kits were sold up to the mid-2000s, when the Banham Conversions ceased production of all kit cars.

Paul Banham didn't leave the car industry as he later in 2007 produced a kit replica of the Jaguar XK180 prototype under a separate company and then went on to restore and create new classic wood rim steering wheels under his Myrtle LTD Company.

This presented the opportunity for enterprising engineering companies to engage a niche in the marketplace.

There are always wealthy customers with a desire for something unique and unusual, so the Banham motor Company started to produce Convertible Aston Martin DBS models.

The cars were purchased from the Aston Martin dealer network by the customers and taken to Banham in Kent to be converted to a convertible body.

It is not clear as to how many Banham conversations were carried out to Aston Martin DBS cars, but we know of six DBS known cars and four DBSV8’s.

This car in the photographs was supplied new by Sundridge Park Motors Bromley in Kent.

The car was converted by Banham in the same year for the first owner and repainted from the original Silver Grey to Aztec Gold with a black Mohair hood covering. The interior leather was White Gold and is now Black leather with Black wilton Carpets.

Having had extensive work carried out in recent months the car is now in very good condition and stunning colour scheme and a well presented car, which will always turn heads where ever it turns up.

An all matching numbers car with grace and style, also a rare motor car, in its own rights. 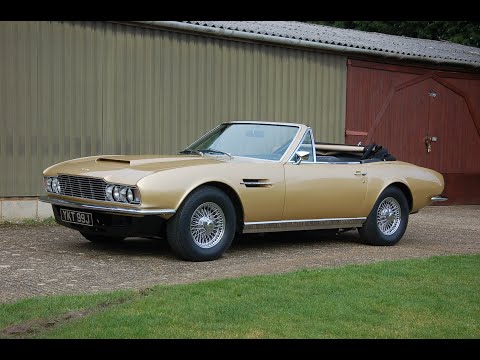