Close Settings
Save & Submit Preferences
Sell Your Car
Contact Us

The Aston Martin DB2/4 was launched at the London Motor Show in 1953. A development of the well-received DB2, the 2/4 was to overcome the restriction of a two seater with the addition of two occasional rear seats.

The luggage capacity also increased with access via a third door or tailgate featuring an enlarged rear window. Folding down the rear seats can further enhance the luggage space. At the time, when three door cars were a rarity, this almost justified the comment, attributed to the Bentley Drivers Club, that the car was then the fastest shootingbrake in the world.

The David Brown 2.6 liter production engine version of the W.O Bentley’s last brainchild, conceived during the later part of the Second World War. With a capacity of 2,580cc the Vantage engine was fitted as standard equipment until the 3.0-liter engine was introduced in April 1954. In 1955 three cars were prepared as works entries for the Monte Carlo Rally and won the team prize. Later that year two of the cars went on to compete in the Mille Miglia.

The Aston Martin DB 2/4 MKII was introduced at the London Motor Show in October 1955. It was the same chassis and mechanical specification as the DB2/4. Fitted as standard, was the 2,922cc VB6J engine, which developed 140 bhp at 5,000rpm. However, as David Brown had bought Tickford at Newport Pagnell two years earlier, the bodywork for the MK II was the first to be made there.

Little change in the general appearance, but there are many minor trim differences and modifications.

The roofline was increased by ¾ inch to give extra head room and this model is longer by 2 inches. Inside the seats had better shape and a proper fly-off lever now situated on the floor replaced the handbrake.

A copy of the original build record for the car shows that Aston martin Agents, Tice & Sons Ltd, sold AM300/1109 to a Miss H Stokes of Severn Stoke near Worcester in June 1956.

Clearly designed to accommodate a tall driver, the build sheet notes that the drivers was lowered by 1 inch. Strangely enough, during the cars restoration 40 years later, the refurbished seats were set as far back to accommodate the height of the contemporary purchaser!

Sadly there is little history recorded on the car in the intervening years until Aston Martin Specialist, Runnymede Motor company acquired the car is 1995 as a restoration project.

It was a project adopted by Mr. Stephen Ross of Bath and, under his direction, a full mechanical and body/chassis restoration was undertaken by Runnymede with marque specialist input from Feltham experts Four Ashes and other known specialist companies.

The job was clearly well done as the Aston Martin Owners Club records show success in the 1999 Goodwood Sprint Cup in Class 2B.

Runnymede Motor Company had further involvement in 2002 when they sold the car on behalf of Mr. Ross to a company based in Southampton.

Latterly the car found its way to its current owner in Hong Kong who has continued the maintenance of the car with the help of genuine parts supply provided by Aston Service in Dorset.

This car has been very well looked after and has some very nice touches and niceties to enhance the cars ownership. A very well documented history files which fills four full folders. This shows the true care, which has been taken over the car by the loving owners who have really enjoyed the ownership.

Recent market shifts have seen the Feltham Aston Martin cars make substantial gains in value that reflects their importance in the development of the marque.

This car is typical of the investment being made by owners in the service and maintained of their asset and is rewarded by their burgeoning value.

The Aston martin DB2/4 MK II is a idea collectors car with easy access to engine bay is very easy car to maintain.

A car which is seen in many hill climbs, track days and world rallies, as they have good ground clearance, good overall power, easy to drive, a great investment. 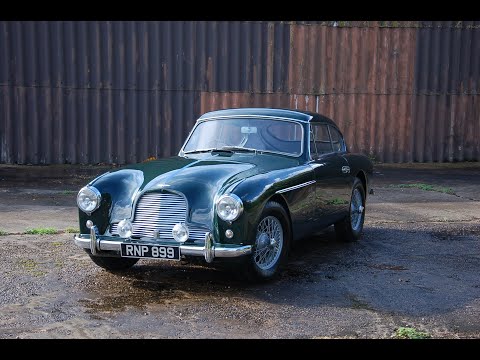